A MINISTRY PARTNER IN GAMBIA BEGAN THE GREATEST JOURNEY DISCIPLESHIP COURSE WITH ONLY HIS SON AND IT GREW TO A CLASS OF 21 AS PARTICIPANTS SHARED JESUS WITH THEIR FAMILY AND FRIENDS!

Johnjames left his home in Nigeria to serve as a missionary in Gambia, a nearby West African nation, in January 2020. He brought with him his 5-year-old son, Unique, while his wife and newborn son planned to join them a couple months later. Due to the global pandemic, however, those travel plans were thwarted. Undaunted, Johnjames and Unique continued with their mission.

Throughout the year, father and son walked the streets of Banjul, Gambia, sharing the Gospel. Operation Christmas Child shoebox gifts and Johnjames’ guitar helped share about God’s love through gifts and song.

The duo distributed 75 shoebox gifts to children ages 2 to 14—even Unique was surprised to receive one himself! They then invited all shoebox recipients to come back to participate in The Greatest Journey discipleship program. Sadly, because of their school obligations and a fear of COVID-19, none of them returned.

“After about a week, Unique insisted that The Greatest Journey should start with him,” said Johnjames. He was reluctant launching the class for just his son, but since he hoped others would join soon, he began it in faith. 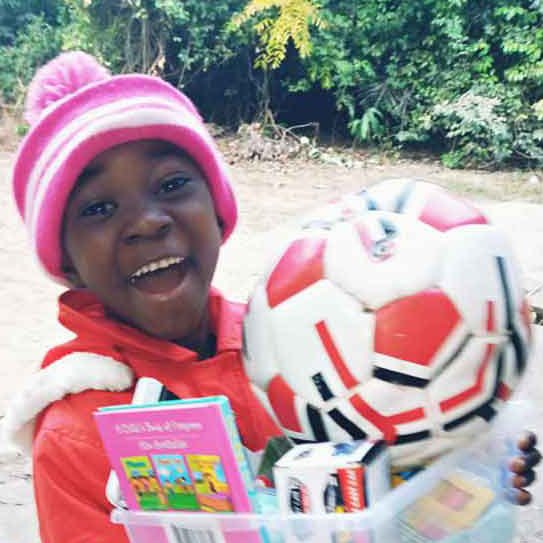 UNIQUE ESPECIALLY ENJOYED THE SOCCER BALL HE FOUND IN HIS SHOEBOX GIFT.

The first lesson on God as Creator took them from Monday to Friday to complete. The next day, Unique went out to play with the soccer ball he received in his shoebox. Two boys, Mendy and Musa, joined him and they got to talking about his new ball. Unique told them about his shoebox gift and The Greatest Journey lessons, inviting these friends to study God’s Word along with him. Excited, he brought his new friends home to Johnjames and asked if they could get shoebox gifts, too!

Johnjames had already distributed all the shoebox gifts he had, so he contacted a local pastor, our Operation Christmas Child regional coordinator, to see if he could get more for Unique’s new friends.

The pastor was uncertain if he could deliver on this request, but in the end, he did, giving Johnjames an opportunity to reach out to a whole new group of children, including Mendy and Musa.

Two days later, the pair joined The Greatest Journey classes, so there was a total of three participants.

The second time that trio met together for class, Mendy mentioned that his younger sisters wanted to join them. Johnjames and the boys consulted with their parents, and with their approval, the siblings joined in, giving them a class of six. 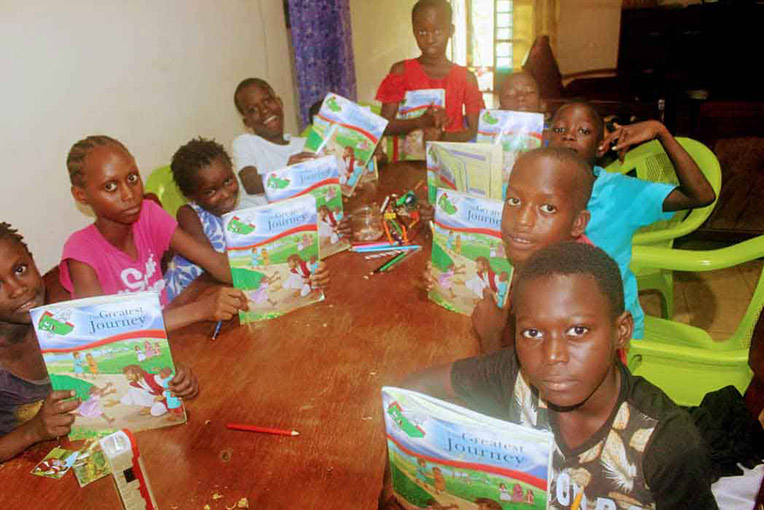 THE NUMBER OF PARTICIPANTS IN THE GREATEST JOURNEY DISCIPLESHIP CLASSES MULTIPLIED AS CHILDREN TOLD THEIR FRIENDS AND FAMILY ABOUT JESUS.

Musa also brought three of his friends, so the class continued to grow as the boys and girls told their friends about Jesus.

With the growing numbers and the need to follow COVID-19 restrictions regarding the size of groups, they split into two classes in two different locations to give the children easier access to the lessons. Every Monday, Wednesday, and Friday, Johnjames would host the morning classes, before he and Unique walked to the next location to host the afternoon ones. This continued until the boys and girls completed all 12 lessons of the course.

“Seven children received Christ as Lord,” said Johnjames. “The parents were joyful for what their children learned through The Greatest Journey, and for the positive behavioral changes they witnessed. From just one child, we had 21 kids attending the class consistently until graduation.”

“From just one child, we had 21 kids attending the class consistently until graduation.”

Teaching All the Bible Stories

The graduation program did not happen immediately because of lockdowns in the country. In the meantime, though, during one of their morning devotional times, Unique asked his father, “Are there only 12 stories in the Bible?”

Johnjames promptly told him no.

“Let’s call everyone back then, so you can teach us all the stories,” Unique said.

Johnjames laughed at the suggestion, but realized that his son was serious.

Not long afterward, Mendy’s mother thanked Johnjames for the shoebox gifts and for The Greatest Journey discipleship course. She also suggested that he continue teaching the children “because the classes are really improving their lives and keeping them busy especially now that they have been out of school for months.”

Johnjames was struck by the repeated suggestion and told her that Unique had mentioned it, too.

Now he hosts a Bible club, named in honor of his son, that meets every Saturday for two hours.

“The aim of The Unique Bible Club is to help the kids increase their knowledge of the Word and to stir up a passion to love, know, and serve God wholeheartedly,” Johnjames said.

“The aim of the club is to help the kids increase their knowledge of the Word and to stir up a passion to love, know, and serve God wholeheartedly.”

These classes involve going back over The Greatest Journey lessons and studying them in greater depth. In addition, they memorize additional Scriptures, grow in prayer, sing and act out Bible stories, and reach out to other kids with the Gospel of Jesus Christ. In addition, since the global pandemic has kept the kids from school, the participants are also learning to read, write, and speak English.

“Thank you, Operation Christmas Child, for the great opportunity to reach out to kids,” Johnjames said. “My involvement with the Samaritan’s Purse project has really encouraged my ministry in Gambia. It enables me to reach out to children and their families and share the Gospel.”

Give to Where most needed

Your gift to "Where Most Needed" equips Samaritan's Purse with the resources—including personnel, materials, supporting services, buildings, and equipment—to fulfill our mission of relief and evangelism worldwide.

Give to Operation Christmas Child